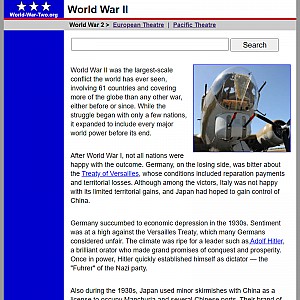 Known as "the war to end all wars", World War One was one of the most significant conflicts in history, claiming millions of lives...

World War 2 Battles at a Glance

Brief versions of the World War 2 Battles for understanding the big picture.

Great War Naval history including the Battle of Jutland, Dogger Bank, Heligoland Bight, Coronel and the Falklands, the scuttling of the...

World War II was the largest-scale conflict the world has ever seen, involving 61 countries and covering more of the globe than any other war, either before or since. The struggle began with only a few nations, but it expanded to include every major world power before its end in 1945. The World-War-Two.org website focuses on the causes, campaigns, and outcomes of this mid-20th century war.