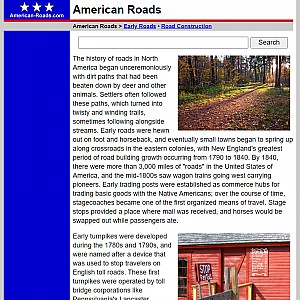 At A-1 American, we are committed to customer satisfaction and to providing the best product and service possible. For over 28 years we have...

Designer Bike Stands road bike display stands are designed and manufactured in Australia from the highest quality materials by qualified...

Early American roads began as dirt paths that had been beaten down by deer and other animals, and had been used by Native Americans. Today, a web of paved roads and highways spans the North American continent. The economic, political, and technological factors that influenced the development of the American road network are discussed on the American-Roads.com website.