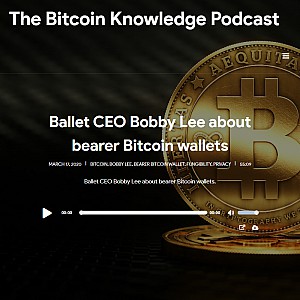 WeUseCoins is one of the oldest, largest and most reputable sites for teaching people about Bitcoin. You can learn how to buy bitcion, get a...

What is Bitcoin Mining?

I mine for Bitcoin. I show what I run under the hood while Bitcoin mining and what others who mine Bitcoin are up to.

Interviews with the top people in the Bitcoin world about blockchain and fintech. Your host is Trace Mayer, J.D. recommended Bitcoin around a nickel and has invested in key infrastructure such as (1) Armory - the most secure Bitcoin wallet, (2) Bitpay - the largest Bitcoin merchant processor, (3) Bitmain - the largest and most profitable Bitcoin mining company and (4) Kraken - the largest Euro and best Bitcoin exchange. He has helped many people profit by demonstrating a significant documented foresight and prognostication ability in the money, currency and payment markets and developments.