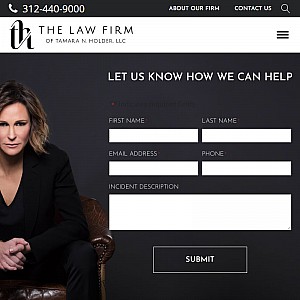 Andreozzi & Foote is a nationally recognized civil litigation firm recognized for helping victims of sexual abuse & violent crimes. We are...

The Chicago Sun-Times recognized Tamara Holder as “One of 50 people Who Make Chicago a Better Place.” Holder focuses her legal work on labor rights including workplace abuse, sexual harassment and discrimination, as well as governors’ pardons, clemency, and commutation of sentence. Holder obtained a Congressional hearing before the Committee on Homeland Security on the issue of improper employment practices. She also testified as an expert witness on wrongful termination before the Congressional Committee on Transportation and Infrastructure. Holder herself is a survivor of workplace abuse - sexual assault. Determined to empower other victims of abuse, Holder shared her story through The New York Times despite being told she would forever be labeled as “toxic” for speaking out. Within only a matter of months of this story, Holder helped a young woman settle a sexual harassment claim against an executive at a major restaurant chain. Through Holder’s legal work, her client obtained nearly 10 times the original amount offered.