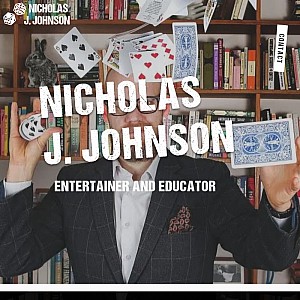 London, UK based close-up/table magician performing across the UK at corporate and private events. Member of The Magic Circle.

Most magicians like to keep their secrets to themselves but Nicholas J Johnson is unlike any of his colleagues. This Melbourne magician uncovers the tricks behind the trade and shows audiences how the illusion is performed. He is both witty and wonderful, captivating everyone from school children to corporate groups. As well as being an expert in entertaining magic shows, Nicholas is also an acclaimed author with 2 books under his belt. He has appeared on popular TV shows in Melbourne and Australia such as The Project and Sunrise.