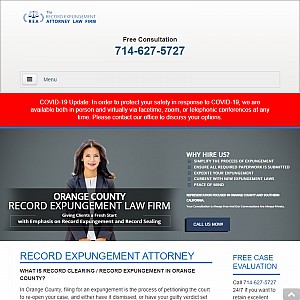 In San Diego County, the expungement process starts by filing a petition for dismissal with the court. If the petition is granted, the court...

At Record Expungement Attorney, we can assess your situation legally, in regard to expungement and related record clearing actions, and...

A Criminal Record is not as permanent as you imagine. If you or someone you know has a criminal record you understand the gravity of having...

In Orange County, filing for an expungement is the process of petitioning the court to re-open your case, and either have it dismissed, or have your guilty verdict set aside. This can be done whether you plead guilty, or were found guilty at trial. The primary California Penal Code that governs expungements is PC 1203.4. If your expungement is granted, your record will read that the case was “dismissed pursuant to Penal Code 1203.4”, rather than stating that you were convicted. This will allow you to truthfully state on any job application that you have not been convicted of the crime. Additionally, the expunged conviction will not show up on nearly all background checks.