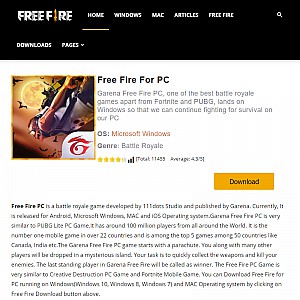 Gvgmall is one of the most licensed sites available for various platforms,whether for software or games, where customers can purchase game...

Free Fire PC is a battle royale game developed by 111dots Studio and published by Garena. Currently, It is released for Android, Microsoft Windows, MAC and iOS Operating system. It has around 100 million players from all around the World. It is the number one mobile game in over 22 countries and is among the top 5 games among 50 countries like Canada, India etc