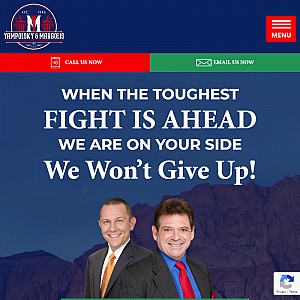 We are exclusively dedicated to providing aggressive and ethical, yet discreet representation to individuals that are charged with criminal...

Mace Yampolsky and Associates have been providing legal services to those in need in the Las Vegas Area since 1986. We have tried virtually every type of serious criminal matter, having completed over 200 jury trials, which include numerous murder defense cases. We are criminal defense attorneys. We do DUIs and Domestic violence cases on a regular basis. We believe that each case, no matter how big or how small needs to be handled properly. Sometimes good people do stupid things. We have helped people in Henderson, North Las Vegas, Spring Valley, Summerlin, and all through Southern Nevada, winning several acquittals. Some of our many successes include: obtaining three murder acquittals; a dismissal of a capital murder case on a procedural issue; an acquittal in the nationally recognized "Computer Gang" case; and successfully arguing before the United States Supreme Court in Nevada v. Riggins (1992), a death penalty case. In that case, Riggins' conviction was reversed and remanded for a new trial. Mr. Yampolsky literally saved the life of his client, David Riggins. We have many clients with drug defense cases, State and Federal, Possession, sales, trafficking, and huge drug conspiracy cases. We also have cases involving the date rape drug. We have many clients in drug courts. We were able to suppress 66 lbs of Marijuana in a federal case with resulted in a dismissal when my client was facing 10 years in prison.