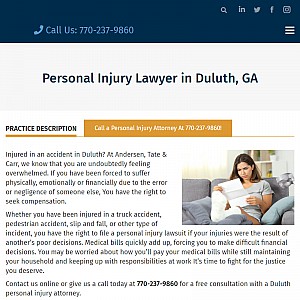 Baumgartner Law Firm is a top-rated personal injury law firm in Houston, Texas. Our award-winning lawyers have been securing maximum...

Andersen, Tate & Carr, P.C began with the simple but important values of community involvement and connecting with people who need help. Ethel and Tom Andersen found the firm in 1988 after they met studying at Duke University, then graduating from law school at Emory University in Atlanta. This was a result of finding their passion for helping others. They decided to start a firm that was rooted in the community and grown by a desire to serve. Tom Tate soon joined the firm, and thirty years later Andersen, Tate & Carr is the preeminent law firm in Gwinnett County and one of the largest firms in all northeast Georgia.