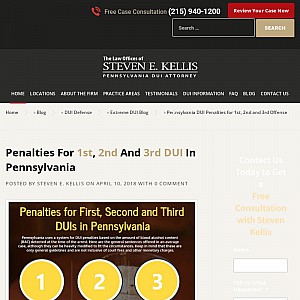 US Laws That Unions Are Responsible For

Union-backed collective action is responsible for many of the labor protections and laws that presently define our American workforce. In...

In a personal injury case, it is often vital to establish liability for the incident that caused the injury. Doing so usually requires...

Everyone can make mistakes, but in the eyes of the law, a slap on the wrist is not adequate for a DUI. Many states, including Pennsylvania, have come up with harsh ways to hopefully deter others from making the same decisions. While the punishments for a first offense can be deemed somewhat intense, the laws for multiple convictions give more severe consequences. These laws are in place to keep people from becoming repeat offenders. While these laws are meant to protect people, they can be exercised overzealously by prosecutors and judges. Certain people, some who are facing unfair charges or did not receive due process, may be treated in the same manner as those who have clearly committed an infraction. No matter the reason for your arrest, you have the right to hire an experienced Pennsylvania DUI attorney to defend your rights.