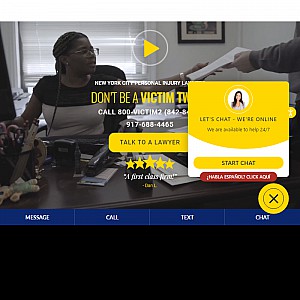 Cameron Law is a Las Vegas-based personal injury law firm helping people throughout the region who have been harmed in a car accident, slip...

Listed as one of Edmonton’s most reviewed Law Firms on Google Reviews and Lawyer Ratingz, our personal injury lawyers take excellence to a...

The Dallas metropolitan area has grown drastically over the past several decades, largely thanks to the area’s economic prosperity. At the...

NYC Personal Injury Lawyer New York City isn’t like other cities, but people who are injured here face the same struggles as everyone else. For help as you recover, team up with an NYC injury lawyer. NYC has more people in it than any other city in the United States. We also have higher population density than anywhere in the country. While both of those facts help make this place a world-class city, they also help explain why there are so many injuries here. From public transit crashes to slip-and-fall incidents, the accidents we see in NYC are as diverse as the people here. The good news for injury victims who need compensation is that there’s one solution for almost all situations in which someone else caused your injury: File a personal injury claim to recover the compensation you deserve. That sounds simple, but in almost all cases, it isn’t. You’re bound to face pushback from the person who hurt you, the insurance company, and other lawyers. That’s not to mention the fact that you’ll have to compile evidence, file complicated paperwork, and build a strong claim. And you’ll have to handle all that while you’re injured and trying to recover. But it doesn’t have to be that hard—just ask our former clients. Make the process of pursuing compensation easier by working with an NYC personal injury lawyer from Greenstein & Milbauer, LLP.