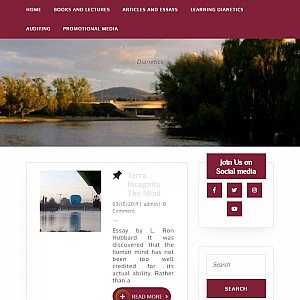 Psychology, mental health, self-help, psychotherapy, and counseling resources on the internet, in print, or by phone for adults, teens...

Look to Harvard Health Publications for guidance on how emotional & mental health can contribute to physical wellness.

Scientology and Dianetics in Canberra

Dianetics is the forerunner of Scientology. Both have been in Canberra, Australia, for over three decades. Dianetics is a mental health philosophy that was developed by L. Ron Hubbard, the author of the book, Dianetics; Modern Science of Mental Health. The book went up the top of the New York Times best seller list when it was published in 1950. What was outlined in this book was extraordinary and worked. But there was more to man than just his mind, as it was thought there was such as thing as a spirit as well. Thus, Scientology was born shortly after. This site is about Dianetics, but the two philosophies well overlap. The subject is about how to counsel people. When done correctly it can and elevate a person and psychosomatic problems.