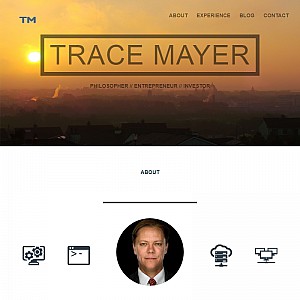 Interviews with the top people in the Bitcoin world about blockchain and fintech. Your host is Trace Mayer, J.D. recommended Bitcoin around...

We explain wireless technology in an easy-to-understand way, and how the products that use this technology work. Topics include wireless...

Who Is Trace Mayer?

Trace Mayer was among the first popular bloggers to publicly recommend blockchain technology, Bitcoin, in its infancy with a market cap under $2m and well before its massive rise over $11B in November 2013 and hosts the extremely popular Bitcoin Knowledge podcast. From Isaac Newton, a supernal monetary scientist who as Master of the Mint created the gold standard, to Nikola Tesla to Steve Jobs it is the innovators and disrupters that forever change markets as well as our lives. The currency markets are the largest markets in the world, ripe for innovation and massive fortunes will be transferred and made in the creative destruction. Blockchain technology holds the most disruptive potential for actually being able to execute such massive creative destruction as capital burrows down the liquidity pyramid into safer and more liquid assets like gold and Bitcoin.