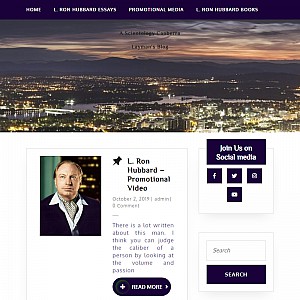 Dianetics is the forerunner of Scientology. Both have been in Canberra, Australia, for over three decades. Dianetics is a mental health...

Scientology has always been in the news. It has been and likely will be controversial in the future. This blogsite is by a Scientologist lay...

The Scientology philosophy was developed by L. Ron Hubbard, and he first coined the word in 1932. L. Ron Hubbard was an adventurer and spent some of his early years of the 1930s in Asia. He learned spiritual philosophy. A lot of that is in his later books. Scientology and the books by L. Ron Hubbard arrived in Canberra about thirty years ago. This blogsite was created by a lay Scientologist. It is hoped from this site that people interested in this may learn something. Many have claimed that L. Ron Hubbard's books work. We hope you find this too.